Paige Hathaway designed this shoulder workout exclusively for Oxygen, a system of super setting that increases the time-under-tension, thereby increasing your opportunity for growth while also helping save your joints.

“Super setting allows you to pre-exhaust specific heads of the deltoid with the first exercise, thus allowing you to recruit another area of the deltoid while using less weight,” she explains. “This encourages hypertrophy while also helping prevent injury.”

Because shoulders can be a persnickety muscle group, Hathaway recommends a thorough and specific warm-up

The correct name for the muscles of your shoulders is the deltoids. There are three sets of fibers that make up the deltoids, which are commonly referred to as heads. The deltoid heads work together to control your shoulder joint. Still, they can also be emphasized individually with certain exercises and movements. 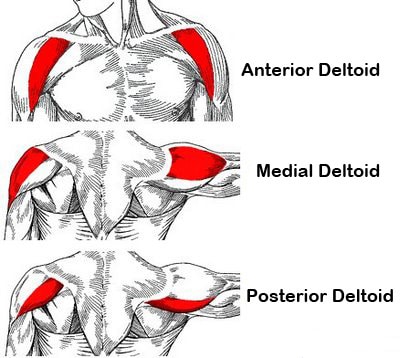 Anterior deltoid – located on the front of your shoulders, the anterior deltoid flexes and medially rotates your upper arm. Exercises that emphasize this head include front raises and overhead presses.

Posterior deltoid – also known as the rear deltoid, this head is located on the back of your shoulder. It works in opposition to the anterior deltoid and is responsible for shoulder joint extension and external rotation. Exercises that target the posterior deltoid include reverse dumbbell flys and reverse cable crossovers.

You probably already know more than enough about your biceps. After all, it’s the most famous muscle in the human body. Even non-lifters can usually identify their biceps and are happy to throw up an arm and flex for a biceps pose!

Biceps brachii – the full name for the muscle on the front of your upper arm is biceps brachii, which means two-headed arm muscle. Known as the biceps for short, this muscle is responsible for flexion of the elbow, flexion of the shoulder, and supination of the forearm. The biceps have two heads (the long head and the short head) which refer to where they attach to the shoulder joint.

A great exercise that impacts the biceps along with your quads and core. Keep your back straight and core tight. Feel the motion and pause for a second at the peak. Weight stays less because you’re really isolating the bicep and the movement is much harder than a cable curl. Rather focus on your breathing. Breathe out as the weight goes against gravity.

PRO TIP: Aim to involve more than one muscle group at a time to burn more calories. Combine upper and lower body exercises.

Primary muscles are the biceps brachii with forearms and shoulders as secondary muscles. A great exercise to add more mass on upper arm with a defined bicep. Keep your wrists firm so your hands don’t lie back as you execute the curl. Elbows shall be at a 90-degree angle with the ground. Keep the motions slow and don’t move your elbows.

PRO TIP: Focus on one arm at a time. Go for single or alternate bicep/hammer curls. This way the TUT(time under tension) increases.

One of the few exercises that helps you get that perfect egg shape bicep curve joining your elbow. The weight stays less in this variation since the tension comes totally on the forearms and lowers the long head of the bicep. Keep your body fixed throughout the set. Don’t lean back as you curl up the bar. Elbows stay fixed to your body.

PRO TIP: Reverse it up. Try reverse grip curls to activate your forearms and get the perfect egg-shaped biceps.

This exercise requires core, shoulder, biceps, and forearm strength to keep the weight up. A great exercise to add massive muscle mass. Try to include this exercise in a superset with another bicep exercise. Hold the plates for 40-60 seconds just after a bicep curl to feel the burn. Use a very slow rep timing and focus on the stretch and contraction of the muscle.

PRO TIP: Superset with isometric holds to maximize your pump and increase your muscle volume. Focus on breathing.

The primary muscle used is the bicep with brachialis and brachioradialis as secondary muscles. Helps to give you a slightly tilted grip allowing you to hit the inner head of the bicep. Retract your shoulder blades and raise your chest to keep your torso as upright as possible. Hold the position for a second at the top and keep the movement slow.

PRO TIP: Play with your grip and tilt your palms inwards to hit your bicep from a different angle. Choose between EZ bar curls or V-extension cable curls.

Target muscles are brachialis and brachioradialis along with stabilizing parts of the deltoids and the trapezius muscles. Helps you get a stronger grip and allows you to squeeze the biceps for maximum contraction. Do the exercise in a controlled way. Remember, elbows stay fixed to your upper torso, and breathe out as the weight goes against the gravity.

PRO TIP: Just after curls, include the hammer curl variation to hit the muscle from a different angle. Go for dumbbell or cable hammer curls.

Targets the biceps along with back, shoulders & forearm muscles.

Keep your core tight throughout the movement so that the tension does not come on your back. Elbows stay fixed and aim for a full range of motion.

Hold the contraction at the peak for a second and bring down your hands slowly.

PRO TIP: Start with a basic exercise to warm up your muscle. Choose from cable curls, dumbbell curls or barbell curls. Increase the weight with each set.

As I always say, there is science behind your every movement while working out. Our custom training plans give you in-depth knowledge of each and every exercise. You need to have muscle & mind connections to make those muscles grow

This workout is designed to be done as part of a body part split routine, where you train different muscles on different days. For example, you might train your chest one day, your legs the next, and then hit your shoulders and biceps a day later.

You can do this workout once or twice a week as needed. Do it twice if you want to build your shoulders and arms more quickly. However, avoid hitting the same muscles on consecutive days, as they need time to recover between workouts.

But, before hitting the weights, make sure you spend a few minutes warming up and preparing your body and mind for what you’re about to do.

Begin with 5-10 minutes of easy cardio, such as rowing, air bike, elliptical, or jump rope. Next, do some dynamic mobility and flexibility exercises for the muscles and joints you’re about to use. Finally, end your warm-up with 2-3 sets of the first exercise of the workout.

A healthy diet is essential for good health and nutrition. It protects you against many chronic non-communicable diseases, such as heart disease, diabetes and cancer. Eating a…

How To Boost Metabolism

Many people say they want to lose weight, but few take steps to improve their metabolism. Metabolism is the process by which you convert food into energy…

Weight Loss Tip 1 – To Diet or Not to Diet? A diet plan reminds us that we’re on a diet; that brings with it feelings of deprivation. Better…

Weight Loss Tip 1 – To Diet or Not to Diet? A diet plan reminds us that we’re on a diet; that brings with it feelings of deprivation. Better…

How to Maintain a Healthy Lifestyle Physical fitness is not the sole basis of being healthy; being healthy means being mentally and emotionally fit. Being healthy should…

In some cases, we end up needing a little shot in the arm. It all makes sense to me! We as a whole have those days. Perhaps…